There are more kitchen appliances on the market than anyone has heard of before. From contraptions that can be used to microwave an egg to basic coffee makers, it can be all but impossible to know exactly for what each one of them can be used. It’s even worse when some of the appliances have similar names and purposes!

The immersion blender vs hand mixer debate brings up one such issue. Are these two devices the same thing? When do I use one as opposed to the other? Which one should I invest in? Why are immersion blenders sometimes called hand blenders? That’s just too confusing!

These are all questions that people often have when looking into types of hand blenders. Let’s take a closer look at these appliances and what they can do so that you can get the right idea about which one is right for your future kitchen needs.

Are These Two Different Appliances Or One Appliance?

Let’s answer the most important question first: Yes! They are different appliances! Though they have similar names and functionalities, the immersion blender and hand mixer are two separate appliances with distinct uses. The hand mixer is more like a stand mixer, while the immersion blender is more like a blender. While there is overlap, that is the simplest way to describe their differences. 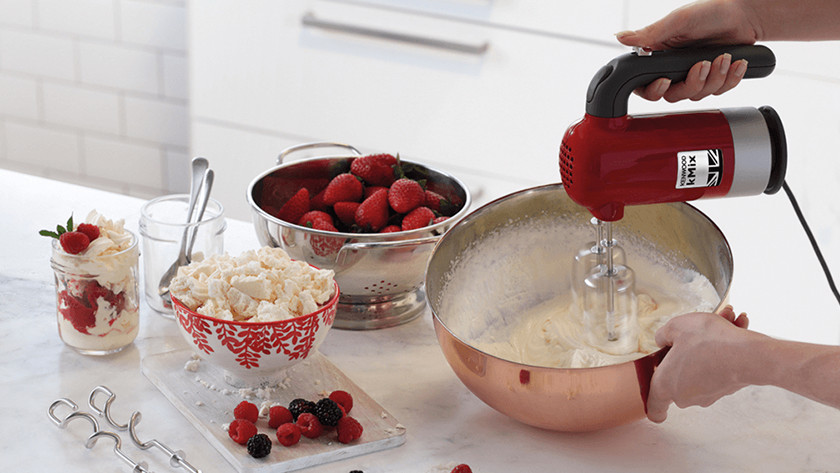 The Immersion Blender Vs Hand Mixer: Difference in Details

Now that you know that they are definitely two different appliances, let’s talk about what each item is so you can discover their differences.

What Is It Used For?

Immersion blenders are largely used for chopping and pureeing foods. They can be put directly into a pot of boiled vegetables to create a puree, or used to blend up a soup that is still too lumpy while it is still hot. In most cases, it works a lot like a blender does without the need to put anything into a larger blender.

The immersion blending can be done right in the original container!

That being said, the immersion blender isn’t a great tool to use for mixing wet and dry ingredients. It doesn’t work well for cake batters or whipping things because it does not incorporate enough air into the mix. For those items, a hand or stand mixer would be the better choice.

These handheld devices are typically powered by a wall plug and boast more power than an immersion blender in most cases. They are also larger than immersion blenders. Using a hand mixer is probably not a good idea for very hot or runny liquids like soups.

The idea of a mixer like this is that it will combine ingredients with one another whether they are wet or dry, but it will not turn anything into a liquid. Even if you mix boiled potatoes, they never turn into potato soup with a hand mixer!

What Is It Used For?

Typically, hand mixers are used for small jobs that would usually be reserved for a stand mixer:

If you don’t keep a stand mixer at home or on your counter at all times, you would turn to your hand mixer to complete these jobs without needing to lug your stand mixer out of storage.

Do I Need Both?

Now that you understand the difference when it comes to the immersion blender vs hand mixer, you might be wondering if both are necessary parts of your kitchen. Unfortunately, there is not a clear-cut answer to that question.

Why? Because everyone uses tools like these differently! While some people find that mixing everything from soups to cake batters with an immersion blender is easy, others still prefer to turn to their hand mixer for mashed potatoes and other mashed items.

The point here is that while each has areas in which it excels, there is a lot of overlap in what the two tools can do. Some kitchens may only need to use one or the other; other home chefs will prefer to have both available to them to avoid any kitchen frustration.

The final decision is up to you now that you know more about the intricacies of each device. Still, there are a number of cases in which people have found that one device works better than the other:

If you aren’t sure which tool to use, try to think about this simple tip: Blenders usually turn things into liquid, so choose the immersion blender if this is your goal. Mixers usually incorporate some ingredients (including air!) into one another, so if this is what you need choose the hand mixer.

No matter which device you find yourself favoring, they both are incredibly useful in the kitchen. There are a number of fusion type devices on the market today that allow you to change out mixer blades with an immersion stick.

If you don’t want to clutter up your kitchen with both of these similar appliances, you have two options: First, you could choose the one that seems most useful based on their stats. Otherwise, you could buy a fusion device that has the power of both. Remember that most cooks prefer the immersion blender while bakers often prefer the hand mixer grinder online!

No matter what you choose, you cannot deny how useful both of these appliances can be!