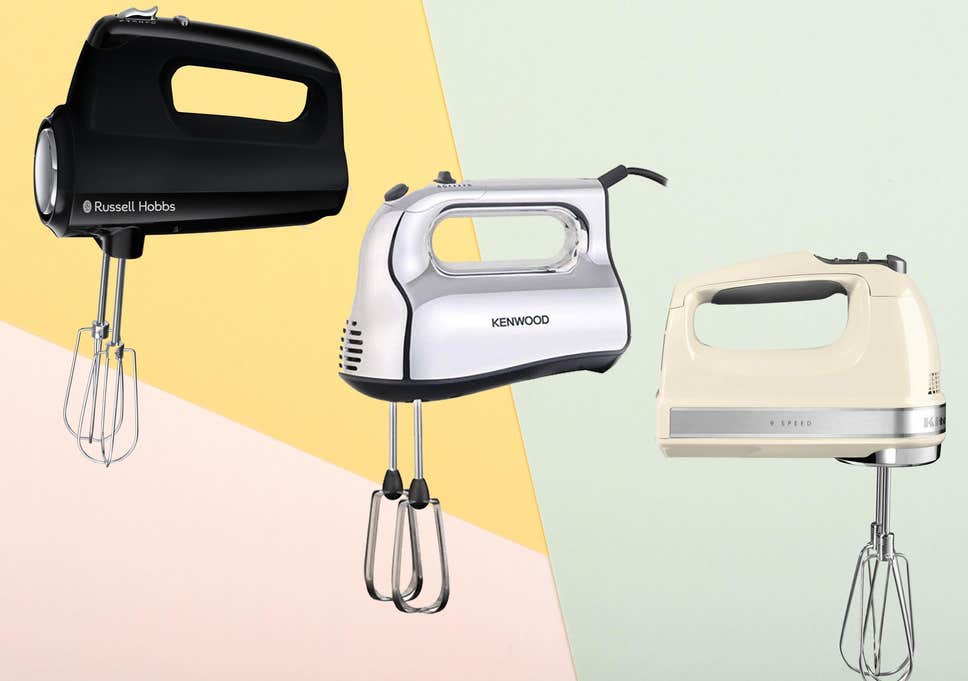 A portable hand mixer is an electric handheld mixing and blending tool that has two removable metal beaters and variable speeds. Some models also have additional accessories, such as a whisk. It’s an essential and versatile addition to any kitchen, even if you don’t cook or bake a lot, because it’s used for mixing, blending, whipping, and beating a variety of foods.

What Is a Hand Mixer?

In the modern kitchen, the term “hand mixer” is generally used to describe an electric mixing device that is portable, but typically still plugged into an outlet. The basic design is of a handle mounted on top of a case that contains the motor with two metal beaters attached underneath at one end. On top of the handle, you’ll typically find speed controls and a button that ejects the beaters.

“Hand mixer” may also be used to refer to rotary non-electric egg beaters. These were kitchen essentials decades ago. Once they were replaced with the electric version in the early 1900s, most homemakers never looked back.

Electric portable hand mixers are considered much more efficient than non-electric rotary egg beaters, have constant power, and the task of mixing requires much less time and effort. That said, rotary egg beaters are still available today. They’re quite popular among campers or in remote areas where this is no electricity. Many households still have a vintage egg beater and use it occasionally.

The range of foods that can be mixed with a hand mixer is quite extensive. It’s a great tool for whipping cream or eggs, mixing cake batter and cookie dough, and making things like icing and salad dressings. One of the most common uses is for whipping boiled potatoes because it’s the easiest way to make mashed potatoes.

There’s no doubt that hand mixers have earned a solid reputation as an essential and practical food prep tool for the homemaker. Even those with a stand mixer may be reluctant to let go of their handheld model because it’s more convenient for small mixing and blending tasks.

There are limitations, though. Batters or foods with a heavy consistency can be difficult to mix with a hand mixer. It depends on the softness of foods and the power of the mixer. For some applications (like kneading bread dough), a more powerful stand mixer is a better choice.

Additionally, some ingredients should not be mixed using a hand mixer. For instance, when making chocolate chip cookies, the chips should be stirred into the dough by hand at the very end. Using your electric mixer for that task can easily (and quickly) burn up the motor. The same applies to other hard ingredients like nuts and some fruits.

As for care, a hand mixer has detachable metal beaters that can usually be cleaned in a dishwasher. The unit can be easily wiped clean and it doesn’t take up a lot of space, so it’s easy to store. When used for what they were designed for, a hand mixer has a long life.

Electric hand mixers are considered very affordable. You can often buy a good quality hand mixer for less than $50. Unless there is a design advantage, it’s not necessary to pay a lot for a basic unit, which would include three or four speeds and one set of beaters. Things that influence price are the number of speeds, the power output, and additional accessories.

Some models come with whisk attachments while others offer dough hooks (though most hand mixers do not have the power to handle bread dough). Others have a built-in storage compartment for the beaters and cord.

Would an electric beater replace a counter (or stand) blender? Not likely. Though some food prep can be completed with either a blender or a mixer, other tasks are better with one type rather than the other. For instance, it’s difficult to blend (mash) potatoes in a blender and trying to beat or mix salad dressing with a handheld mixer can be messy.

Then there’s a hand blender (also called an immersion blender) to consider. It’s a long wand-like appliance that typically has a blade on the bottom similar to a counter blender, but offers the portability of a hand mixer. Though you can blend foods in a bowl easily or smooth gravy in a pot, and some models come with a whisk attachment, this handheld appliance has its limitations. Primarily, it simply doesn’t have the power of a counter blender or hand mixer and shouldn’t be used for hard ingredients and you can buy mixer online.

For most, kitchen appliances such as a hand or counter blender have a supplemental nature, though not all home cooks would agree. It’s often a matter of preference and the food task at hand.