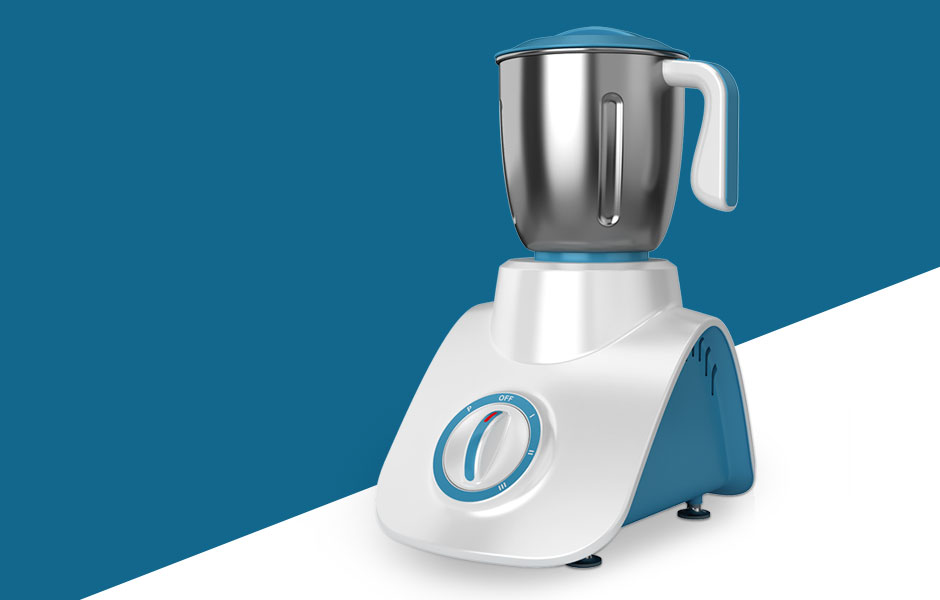 Having used different mixer grinders over the past decade and a half at my in-laws, parents, and my own home, Except for the breakage of the chutney jar, which still did not affect its performance, there have been no complaints so far. I wouldn’t say that I grinded turmeric using it (as shown in many mixie ads) but we use it for grinding softer spices, batter, masala paste etc and it simply is one of the best mixer grinder in India.

Now, if you are looking for a mixer grinder that offers superior functionalities, then Preethi Zodiac is a wonderful choice.
In addition to using it as a mixer grinder, you can chop vegetables and knead atta using its Masterchef jar. Moreover, the 3-in-1 insta-fresh juicer jar can be used not only for extracting juice but also for making fresh coconut milk and extracting tamarind juice.

My mother-in-law gifted me with this mixer grinder when we moved to our new home. Honestly, I was a skeptic in the beginning, as I had never heard of the brand before. But when I started using it, all the skepticism simply vanished.

I had used a Panasonic mixer grinder earlier and comparatively, Sujatha has far superior grinding capability. Its motor is pretty powerful and the blades are quite sharp.

After using it for about three years, the plastic body of the chutney jar cracked. Even so, it did not affect the performance. Though I bought a replacement jar, I still use the old cracked jar as it works fine.

Powered with a 900-Watt motor with double ball bearings, the mixer grinder is low maintenance and runs without any major complaints for years.

The motor is capable of running non-stop for up to 90 minutes—making it the preferred juicer and mixer grinder in juice bars and small restaurants.

The blades are made of stainless steel and the mixer itself is vibration-free and shockproof.

The smaller stainless steel jars can be used for dry grinding and chutney making, while the dome jar is suitable for wet grinding idli and dosa batter.

In case you need an extra jar, you can buy it online too.

Now, talking about the negatives, a complaint that can be seen in some of the online reviews is that the jar blades become a little blunt after a while. However, I personally haven’t found any such problem.
It is also seen that the jars spill if it is overloaded. This is mainly seen in their newer model dry grinding jar with plastic lid.

Featuring five jars including 3 in 1 insta juicer and food processing jar, Preethi Zodiac is not just a mixer grinder, but, a complete food processor with which you can knead the dough and chop veggies.

The 3-in-1 insta juicer can be used to make juice from fresh fruits, extract tamarind essence and coconut milk as well as be used as a blender to make shakes and lassi.

Using the master chef jar with a 2.1-liter capacity, you can knead chapatti dough and chop vegetables easily. It can also be used as a citrus presser, for grating, slicing, and mincing meat. But a point to be noted is that, unlike usual food processors, you have to manually change the blades of the master chef jar for different functions. These blades are as sharp high-quality knives and require special care while changing.

Thanks to the three-legged anti-skid base, the mixer grinder doesn’t move or vibrate even when it does heavy-duty grinding. The system also has an overload indicator that glows orange when the jars are overloaded.

In terms of safety, Preethi Zodiac, in addition to the overload protection system, also features a circuit breaker, an insulated power cord, and separate earth wire.

The highlight of this mixer grinder is its double-lock mechanism, whereby the machine starts working only if the jar, as well as the lid, is correctly locked.

Thanks to the suction pad, the mixer doesn’t move even during heavy grinding. The mixer also has a circuit breaker that prevents the motor from burning in case of overload.

In addition to a 200 ml chutney jar and two larger stainless size jars (the dry jar having 500 ml capacity and the wet jar having 300 ml capacity), it also comes with a transparent polycarbonate juicer jar with excellent quality nano-sieve that collects fruit/vegetable pulp filtering the juice perfectly.

While most of the mixers have a rotary buttons, Panasonic has push buttons for different speeds.

Talking about the efficiency at grinding, though the grinder’s motors aren’t as powerful as Sujatha, Panasonic makes up for it using samurai edge blades that ensure high performance and durability.

Another advantage is that the blades can be easily removed thus helping in thorough cleaning of the jars.

Overall, it is a fairly powerful mixer grinder. My sister-in-law has been using Panasonic’s similar older model for the past seven years. It had to be serviced once due to a problem with the lock, but otherwise, it has worked above satisfaction.

If you would like to have this mixer grinder with a more powerful motor, then you can take a look at the newer 1000 watt motor-powered version available at similar pricing.

Few users are found to have difficulty in understanding how the locking mechanism works. If in case you have such difficulty, then the below video would be helpful. Watch from 2.30 minutes on.

Bosch recently entered into the mixer grinder segment with a range of products with motor power ranging from 500 to 1000 watts.

The Truemix 1000 Watt Mixer Grinder online available which is one of the most powerful mixer grinders from Bosch has been garnering rave reviews.

The mixer grinder comprises 4 jars.
The largest plastic blender jar has 1500 ml capacity and can be used for making juice, smoothies and also for coconut milk extraction. Note however that the fruits have to be cut into small pieces in order to extract juice efficiently.
The wet grinding jar is of similar capacity. In addition to grinding masala paste, it can be used for making idli and dosa batter too. Bosch states that the patented flow breaker in the wet grinding jar ensures even grinding and better aeration, resulting in the fluffier batter. So, if you invest in this Bosch Truemixx, you needn’t buy an additional wet grinder.

Next, you have a dry grinding jar of 1000 ml capacity. The unique feature of this jar is the blunt pounding blade. Bosch claims that the spices ground with this jar retains the unique flavor and aroma that you typically get from using traditional mortar and pestle. Most of the user reviews agree with it. Users were able to make fine powders from spices like pepper, coriander, turmeric, etc. easily.
Finally, you have a 400ml chutney jar sufficient for a 4-5 member family.

Blades as the body of the jars are made of high-quality stainless steel. All jars have nylon lid locks that ensure hands-free operation. Bosch advises in order to ensure a longer life, clean the jars immediately after every use and keep it upside down for drying.
The housing which is made of high-quality ABS plastic should never be cleaned in running water, but rather be wiped with damp clothes.

Even though Bosch Truemixx is expensive, user ratings are quite positive assuring you that it is a value-for-money products. Except for occasional reports of damage during transit and some finding it a tad noisy, there are hardly any complaints about the performance.

Blue Leaf Diamond is one of the budget-friendly mixer grinders from Preethi that doesn’t quite compromise on quality and performance.

With jars and blades made from 100% stainless steel, this mixer grinder comes with a 750-watt motor that helps grind masala, spices and batter with ease.

The jars feature a Flexi lid, which is interchangeable, helping you convert a 1.5-liter jar to a 1-liter capacity.

Safety-wise, the jar has an ABS plastic body, and the device features a heat-sensitive cut-off, which protects itself against voltage fluctuations and overload.

Though you cannot really expect the grinding efficiency and finesse of Sujatha or Panasonic, it still does a fairly decent job.

A drawback stated frequently in the reviews is that it is a bit noisy compared to other 750-watt mixer grinders.

Bajaj Rex is one of the economical mixer grinders available in the market. The mixer grinder comprises a 1.25-liter wet grinding jar, 0.88 liters wet and dry jar, and 300 ml chutney mixer jar.

The multi-function stainless steel blade system and strong motor help achieve an RPM of 18000, which grinds all types of food easily.

Though it has a few negatives, considering its price tag, it is overall a value-for-money product.

Here you can check each of the mixer grinders is best in its category and I hope this will help you to find something useful for your kitchen and I will recommend you to buy Bajaj Rex 500-Watt Mixer Grinder because this mixer grinder has a great trust level of customer.