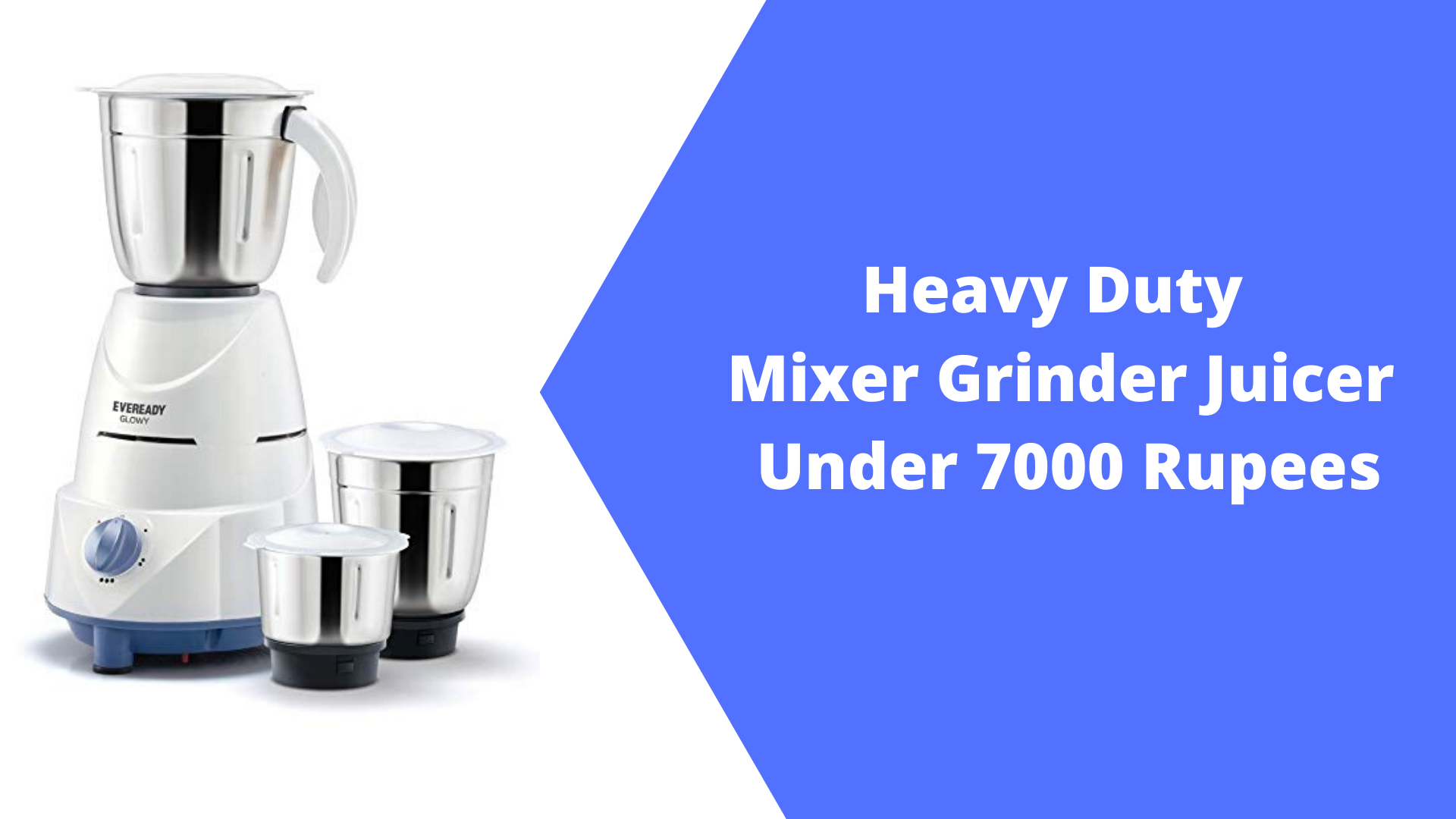 Today, almost every Indian home needs a high power mixer grinder. Such mixer grinders come in handy whenever you want to make fresh flour from grains. However, due to the onerous tasks that these devices are charged with, very few mixer grinders live up to the expectations of their users. Apparently, the cheaper you go, the weaker the quality of the Mixer grinder you get.

A friend of mine told me the other day of how she bought an inferior quality grinder. Guess what, she ended up spending more money to repair it than it would have cost her if she had just bought a high-end mixer grinder in the first place. Most cheap grinders either end up with a damaged motor or a leak in the jar coupling.

Unfortunately, whenever a mixer grinder starts having these unannounced breakdowns, it becomes almost unserviceable. No number of repairs can restore its efficiency, and the situation gets even worse if you are a heavy user. Consequently, if you want to steer clear of such problems, just buy a heavy-duty mixer grinder. In this article, we evaluate some of the best mixers in the market today. Hope you make the right choice.

You need a mixer machine with a powerful motor for some specific kitchen tasks. India’s favorite Kitchen appliance brand Philips launched a multi-functional mixer grinder machine recently. It is a pricey appliance, but it is worth considering.  The design of this Philips mixer machine will blow your mind for sure. Smooth curves and the black finish give this machine a much premium feel. 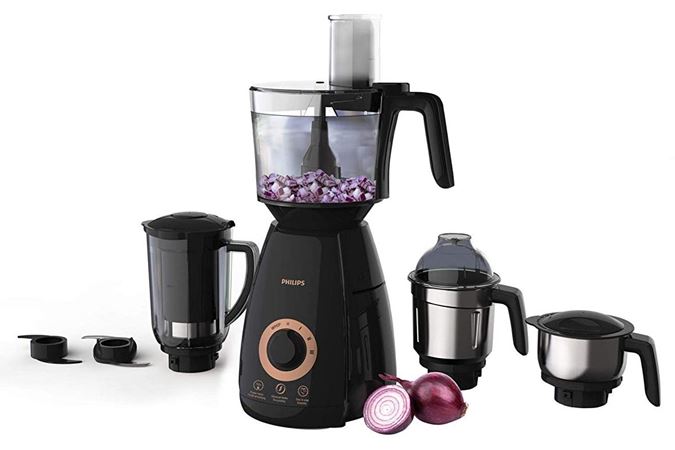 You can grind hard ingredients like dry coconut and turmeric on this mixer machine. Its super sharp blades are designed in a way that the result is always consistent. You can set the motor speed at any of the four available settings. The speed control wheel is pointed for an easy reach and safe access, withal.

Its heavy-duty parts are strong enough to handle extreme situations. The non-slip feet of this machine hold the surface firmly so that you do not have to struggle much during the operation. Its blades are made up of stainless steel that further ensures safety.

The Philips Avance mixer grinder juicer and chopper machine is an excellent food processor. It is a mixer, grinder, blender, kneader, and chopper, a 5-in-1 kitchen appliance.

Mixer Grinders are an essential tool in any Indian Home especially judging from the fact that most Indian dishes require heavy grinding and blending operations. I personally have reviewed tens of mixer grinders especially those that are prevalent in the Indian market. Nonetheless, I’ve always forgotten to review grinders from one particular brand, Cookwell. 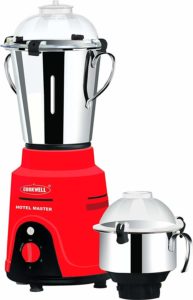 Well, I wouldn’t exactly say that Cookwell is the best mixer brand in the world, apparently because there are literally hundreds of them worldwide. However, what I would say is that they manufacture some really affordable, durable and reliable kitchen appliances including grinders.

If you are looking for a cheap mixer grinder online, especially for commercial use, then I would strongly recommend getting the 2HP Cookwell Hotel Master Mixer Grinder. Apart from being more powerful than the Preethi Xpro Duo, this grinder is also cheaper. We reviewed the Xpro Duo about a month ago, feel free to check it out. Among the likable features that I noted in this gadget are:

1500-Watt Powerful Motor: With kitchen gadgets, stronger is always better.  Why? Because if the device is stronger, its operation will be faster. Nonetheless, there is a limit depending on the area of application. Of course, you wouldn’t want to use a lorry to carry a load that you can simply carry in the trunk of your car. That is downright uneconomical.

Cookwell engineers designed this grinder to work with a 2HP motor that has a total wattage of 1500 Watts. Actually, this is perhaps too powerful, considering that most kitchen grinding operations barely need over 750 Watts. I have always advised my readers that the best mixer grinder for home use should not go beyond 750W in power consumption.

However, settling for a much more powerful grinder like this Cookwell device won’t do you any foreseeable harm. The only unfortunate thing is that you end up wasting too much energy on something that would otherwise be done with a simpler and less-power consuming device.

Ideal for long hours of Grinding like in Hotels: All the same, there are some upsides of using a powerful mixer grinder. First, the motor will hardly ever jam even in the case of an overload. Secondly, the motor can run for hours without breaking down. In my opinion, this 2HP heavy duty mixer grinder would fit best as a Hotel device than a home grinder. For one the 1500W motor can crush stuff faster and operate for long hours without any possibility of jamming.

Preethi has been manufacturing mixer grinders since its inception back in 1978. The company began as small Mixer grinder factory and has grown into a full-scale electronics brand in India. Today, Preethi is recognized as one of the best mixer grinder in India. This is partly because the company has been in the industry for more than 40 years. 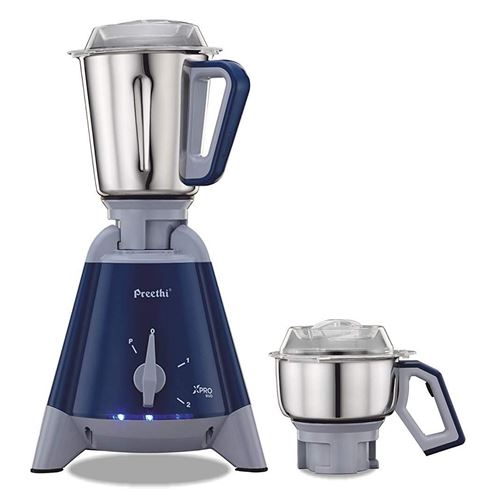 Lately, the company released a rather intriguing Mixer model called the Xpro Duo MG-198 Mixer Grinder. Apart from being reasonably priced, this is one of the Company’s best-looking grinders. It’s actually a must-have for all medium-sized Indian families. Below is what we liked about the 1300-watt Preethi Xpro Duo mixer grinder.

Futuristic and Heavy-Duty design: Notably, the Xpro Duo MG-198 has a tough thermoplastic polymer (ABS) casing. ABS casings are light in weight though sturdy on the outside. They are also shockproof, hence safer. Additionally, the manufacturer made the jars using thick stainless steel. Therefore, they can withstand rigorous crushing tasks.

Design-wise, this Preethi juicer mixer grinder has a unique and modern concept.  First, it has a towering structure that makes it easy to use even on a short table. The well-pronounced bezels give the device a futuristic design.

Powerful Motor: This mixer grinder operates with a powerful 1300-Watt motor that can crush even the toughest of grains. The blades are all made from stainless steel meaning they can crush with ease. We also liked the fact that this mixer has a bearing mounted on its rotary system to increase its efficiency.

Moreover, the manufacturer integrated Turbo-vent technology into this device so as to facilitate motor cooling. This technology makes the Xpro Duo the best quality juicer mixer grinder since it doesn’t preheat ingredients when crushing them. This way the food’s taste remains untainted and natural.

Convenient and Hands-free operation: Apart from having a superb design and a powerful motor, this device has a number of convenience features. For instance, the manufacturer incorporated a 3-Point Lid Lock on the jars so as to allow for hands-free operation. Typically, with other mixer grinders, users have to hold the lid tightly above the jars so as to prevent spillages. However, with the Preethi Xpro Duo, you don’t have to do this. The lid lock system already does it for you.

Additionally, the manufacturer used the finest Nylon & Neoprene Couplers on this gadget to guarantee a straightforward experience. This grinder is arguably the best mixer grinder in Indian for cooking. We would recommend it to any medium sized-family.